Hi, and welcome to my Piano Service Blog. The purpose of this blog is to help inform you of the design, function and care of your piano and to introduce you to the services I provide. This first article contains a short history of the piano. I hope you enjoy it.

A little over 300 year ago, around the year 1700, Bartolomeo Cristofori, “Keeper of the Instruments” to Ferdinand de Medici, Grand Duke of Tuscany, invented an instrument that changed music forever. The primary keyboard instruments of that day were the harpsichord and the clavichord. However both instruments had limitations. The clavichord allowed for dynamic expression but had a sound too soft for large audiences. The harpsichord on the other hand had sufficient volume but did not provide any expressive control.
Cristofori wanted an instrument that combined the volume of the harpsichord with the control of the clavichord, and thus the piano was born. It employed a unique mechanism (the piano action) which caused the hammer to strike and then rebound off the string, thereby allowing the strings to vibrate freely. By varying the force applied to the keys the piano could be played louder or softer, giving composers more freedom for emotional expression.
The name piano comes from part of an early description of the instrument by Cristofori,  un cimbalo di cipresso di piano e forte,  translated a keyboard of cypress with soft and loud. This was shortened to pianoforte or fortepiano and eventually just piano. Over the next three hundred years, many advances were made to the piano. The earliest pianos had a range of just five octaves with thin strings and a wooden frame, thus limiting their overall volume. With the advent of industrial revolution came the introduction of high quality piano strings, the cast iron frame and an increase to the modern seven plus octave range.

There are four principle parts that produce the sound made by the piano.

Today there are many types of pianos available to musical enthusiasts. They are generally divided into two classes, grand and upright. In grand pianos the strings run horizontally away from the keys with the action located beneath the strings. The inclusion of a repetition lever in the action allows for a more rapid playing of repeated notes. Grand pianos can range in size from under five feet for baby grands to over nine feet for concert grands.

In an upright piano the strings and frame are vertical with the action in front of the strings. Upright pianos are divided into several classifications according to their height. Generally speaking, the taller the piano the better the sound because of the greater string lengths. 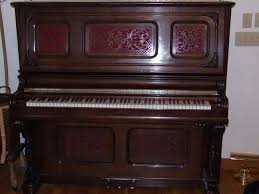 I hope you have found this short introduction to the piano informative. As I continue this series I will be providing additional information on the function of the different elements in the piano, tips on caring for your piano and highlights on pianos that I service.